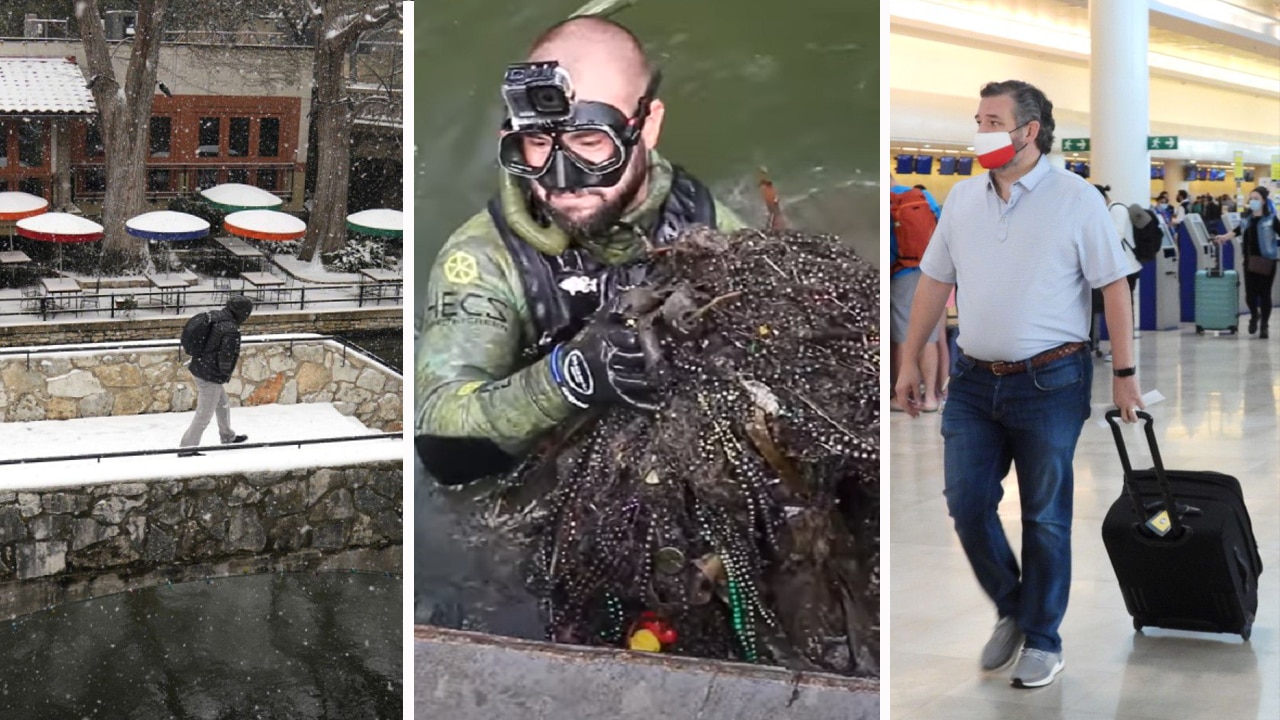 The COVID-19 pandemic has dominated headlines this year in the San Antonio area, but there were several other stories that caught the attention of KSAT.com readers.

From the winter storm and the Astroworld tragedy to new Texas laws and trash diving in the River Walk, these are the stories y’all read most this year.

A popular diver on YouTube returned to San Antonio this year to dredge “treasures” from the San Antonio River legally after getting stopped by police for attempting it in 2020. Brandon Jordan is an outdoorsman who has attracted a YouTube following with nearly three million subscribers. His dives into the San Antonio River were so successful, he created two videos about his adventures. Read more about what Jordan found in the depths of the river here.

There are more than two dozen lakes in Texas that are classified as being infested with an invasive species known as zebra mussels, including Lake Lyndon B. Johnson. In July, a homeowner in the Kingsland area shared a photo to social media showing a float her family keeps in the water at Lake LBJ that’s completely covered in zebra mussels. You can read more and check out the photo here!

A total of 666 new laws went into effect on Sept. 1 in Texas. Some major law changes were inspired by the coronavirus pandemic and February’s winter storm while others were related to guns, abortion, body-worn cameras, education and the use of medicinal marijuana. We broke down the nine new laws that received the most attention here.

KSAT.com was the first news outlet to report on the photos circulating on Twitter that appeared to show Texas Sen. Ted Cruz on his way to Cancun, Mexico, during the state’s historic and deadly disaster in February.

Cruz would later confirm he flew to Cancun and returned a day later. The senator was blasted for leaving the state he represents in Congress for a tropical paradise amid a historic power and water crisis that affected nearly every Texan. In an interview with ABC News, Cruz said he took the trip with his two daughters and his wife, who wanted to get out of the cold weather for the weekend. Read more here.

5. This is what happened at the Travis Scott concert and everything we know so far about Astroworld

Ten people died and dozens were injured during a chaotic night at a Travis Scott concert called Astroworld. An estimated 50,000 people were in attendance at the Houston festival in November. A crowd surge at the start of Scott’s show trapped dozens of concert-goers leading to deaths and injuries. Three San Antonio families are suing Scott after the deadly event. You can read more here.

The I-10 rivalry between the Spurs and Rockets got a little heated in the stands in February when social media videos showed a brawl between opposing-team fans. The fight broke out in the stands during a game with multiple people involved. It’s unclear what led to the incident and if anyone was injured. You can read more and see the videos here.

A San Antonio park police officer shot a man who opened fire at the airport in April. Police chief William McManus said the suspect, later identified as Joe Gomez, 46, was seen driving the wrong way in the airport’s Terminal B. Gomez had opened fire from a highway ramp earlier in the afternoon before making his way to the airport.

The park police officer confronted the man who immediately got out of his car and opened fire at the officer and the building. The officer returned fire, hitting Gomez twice. Moments later, Gomez turned the gun on himself. An autopsy from the Bexar County Medical Examiner revealed that Gomez fatal gunshot wound was self-inflicted. No one else was injured. You can read more about this incident here.

In the midst of the devastating winter storm, ERCOT, the state’s power grid operator, initiated rolling power outages in the early Monday morning hours of Feb. 15 to protect and reduce demand on the state’s electric grid. That left millions of Texans literally in the dark and cold for long amounts of time with temperatures dropping throughout the week. ERCOT directed local utilities to begin restoring power to thousands of Texans Tuesday afternoon, but many were still left without power for days. Read more here.

A teenager was arrested after Bexar County sheriff’s deputies said she was seen on a Snapchat video in July stealing a necklace from the body of a man who committed suicide. An arrest warrant affidavit stated that Bethany Martin, 17, and a female friend, 16, discovered the man’s body in Southwest Bexar County. One video showed Martin and her friend near the man’s body, and another video showed Martin removing a chain and medallion from his neck, according to the affidavit. You can read more about this arrest here.

10. Were your plants damaged by the freeze? Here’s what to do next.

While many of us had more pressing issues during the February deep freeze, there was a significant toll on landscaping. KSAT Weather Authority Meteorologist Justin Horne spoke to a horticulturist with Texas A&M Agrilife in San Antonio about how to salvage some of those plants and trees that quickly went from green to brown. You can check out the full story here.