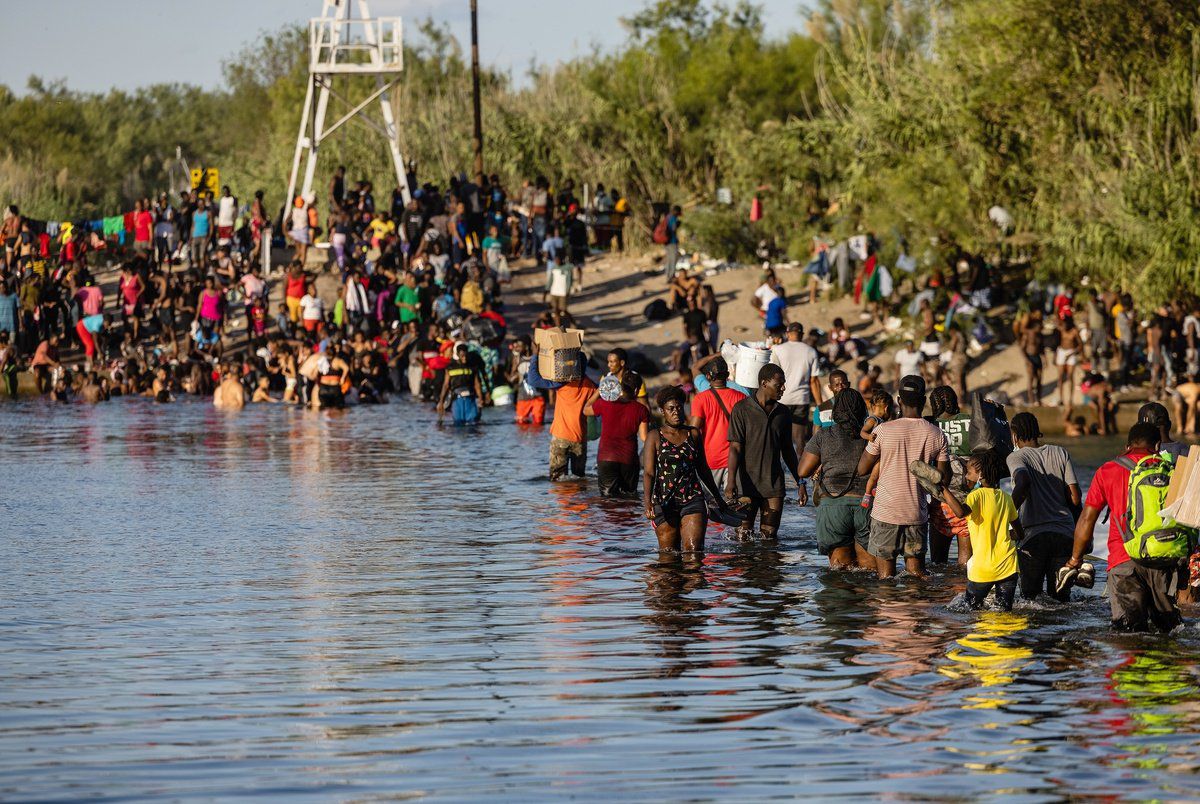 Just the mention of the word immigration can be divisive. Some people consider themselves for it, or against it. Some see it as much more nuanced and complex than that.

But nearly everyone sees it as political.

It’s a sensitive topic, particularly for those who have left their home countries to find safety elsewhere. For this episode of KSAT Explains, we wanted to share the stories of some of those people, but despite several requests, no one we reached out to was willing to go on camera. Some feared deportation or retaliation in some way.

The pandemic has made this already sensitive issue even more complicated. In March 2020, the Trump administration invoked a little-known provision in federal law that has essentially shut our borders to migrants and asylum-seekers for the past 22 months.

In this episode of KSAT Explains, we’re examining how the asylum-seeking process is supposed to work, and how Title 42 has upended that system.

(Watch the full episode on-demand in the video player above.)

Asylum is a legal effort at immigration by someone who is fleeing their home country. Essentially, they are seeking refuge in the United States.

If someone wants to seek asylum in the United States, the first thing they must do is get to the border. For many migrants, that means a treacherous international trek north that kills hundreds every year.

Once they arrive at the U.S. border, asylum seekers must cross into the country because a person must be physically present in the U.S. to seek asylum here. Even though doing so without documentation is still ostensibly against the law.

Once the migrant has made it into the U.S., they must present themselves to a federal immigration agent, often at a port of entry, or bridge.

The next step is typically a “credible fear” interview. Credible fear is the threshold an asylum seeker must reach to advance in their legal effort. Federal immigration agents ask questions to determine why the person is fleeing their home country and whether that is considered credible fear of persecution under U.S. law.

If the person demonstrates a “credible fear,” then the next step is a hearing in front of an immigration judge. The hearing, which will determine whether an individual is granted asylum status, will often take weeks or even months.

During the time before their hearing, they are often detained by ICE [U.S. Immigration and Customs Enforcement] or sometimes released to a family member in the U.S. but tracked with an ankle monitor or an app on their cell phones.

Erica Schommer, practicing attorney and clinical professor of immigration at St. Mary’s University School of Law, said the “vast majority of people who are seeking asylum have a friend or family member in the U.S. that they’re hoping to stay with during the process.”

“Detention looks different if you’re in a family unit, or if you’re just an adult who’s alone, or if you’re a minor,” said Cristian Sanchez, supervising attorney at Refugee and Immigrant Center for Education and Legal Services, or RAICES.

Once an asylum seeker has their day in court, the judge can grant or refuse asylum. If a person’s case is denied, they face deportation. Rulings can be appealed but that can take years. Asylum seekers might also try another avenue of legal migration.

The timeline is not often followed

As complicated as the above process may sound in theory, it gets even murkier in practice. With the asylum process, there are time frames in which certain steps are supposed to be taken. But from almost the very first step, experts say deadlines are typically not met.

For example, when migrants turn themselves in, they are initially detained in a U.S. Customs and Border Protection facility.

“Nobody is supposed to stay in CBP custody for more than 72 hours,” Schommer said. “We know that that’s routinely violated.”

If a migrant is referred for a credible fear interview, they are transferred to an ICE detention center – like the one in Pearsall – while they wait. That interview is supposed to happen within seven days. But, again, Schommer said that almost never happens.

Once a person has their case before an immigration judge, there is no required timeline for when progress must be made in the case. And how long migrants must wait for a court date often depends on where they choose to wait out the process.

“If you do the whole process while you’re detained, it takes a couple of months,” he said.

But if a migrant is able to and chooses to be released, it could take years.

“Many detention centers have their own court, so they have judges just for that detention center,” Sanchez said. “Judges that do non-detained cases might be seeing asylum [cases] and a hundred other things. So it could just take longer.”

The immigration court system has long been backlogged. The attorneys we talked to believe the backlog can be blamed on a combination of things, with lack of resources and bureaucracy being among the most important.

“The immigration court is part of a federal agency and it’s slow to respond,” Schommer said.

The pandemic didn’t just add to the backlog of immigration cases. It also led to the authorization of a little-known provision in federal law that has essentially shut out many migrants for the past 22 months.

In March 2020, ten days after the World Health Organization (WHO) declared the novel coronavirus a global pandemic, then-President Donald Trump invoked section 265 of Title 42 of the United States Code. The public health law allows the federal government to ban people or goods from entering the U.S. to prevent the spread of disease. In this case, COVID-19.

With this provision invoked, instead of processing asylum-seekers and migrants who are hoping to stay in the country, border agents can now just fingerprint them and expel them from the U.S., either to Mexico or their country of origin.

It’s important to note that this isn’t legally the same as deportation.

“It doesn’t carry the future consequences that people would have if they were deported at the border by an immigration judge,” Schommer said.

When someone is deported, they are barred from re-entering the country for a certain number of years, depending on the reason for the deportation. Title 42 expulsions don’t carry that consequence, which means it’s less risky to attempt to re-enter the country.

But that doesn’t mean there is no consequence for those expelled.

“It does have a real effect on real people who have merit for wanting to apply for asylum, who have actually had something really bad happen to them,” Sanchez said. “Returning them could mean they die.”

All of this is happening as border apprehensions at the U.S.-Mexico border reached a 20-year high during the 2020 fiscal year. The graph below shows the number of southwest border apprehensions for the last eight years. Migration numbers have been steadily growing since April 2020, when there was a lull in border crossings due to the pandemic.

Some of the immigration attorneys we talked to say these numbers can be a little misleading since they track arrests, not individuals.

One of the reasons for this, cited by the report? Title 42. The provision is creating a system in which migrants are rapidly processed at the border and sent back to Mexico, without a deportation order, making it easier and less risky for people to cross repeatedly.

In May 2021, citing increasing security concerns and social unrest in Haiti, the Biden administration granted temporary protected status for Haitians already in the U.S.

But the status would not apply for those who arrived in Del Rio months later. The United States’ decision to expel thousands of those migrants under Title 42 was met with protests from immigration activists and the American Civil Liberties Union.

“When Title 42 is applied and people are sent back without any sort of screening, that is arguably a violation of our own law, and also of the treaty obligations that the U.S. is party to by signing the Refugee Convention,” Schommer said.

The Trump administration cited preventing the spread of COVID-19 as the reason for invoking Title 42, but critics have argued that reason was not legitimate.

Reports that have come out since March 2020 seem to back up that criticism. In November 2021, a former official with the Centers for Disease Control and Prevention told a congressional committee that the bulk of evidence did not support using Title 42 as a public health measure because it would not slow the spread of COVID-19.

After taking office, the Biden administration made an exemption to Title 42, halting the expulsion of unaccompanied children. But besides that exemption, his administration has largely continued to use and defend the provision.

The administration is even facing a lawsuit from immigration activists who are arguing that the government is using Title 42 as a law enforcement tool, not a public health tool. Oral arguments in that case are set to begin this month.

In the meantime, Sanchez said he’s observed migrants figure out other ways to enter the U.S.

“They’re not being allowed to present themselves to apply for asylum at the border,” he said. “They take other means because they don’t feel safe. They don’t feel secure.”

Title 42 is not the only controversial policy currently affecting migrants. The Migrant Protection Protocols, better known as the Remain in Mexico program, allows the United States Department of Homeland Security to send non-Mexican asylum seekers to Mexico while they await their hearings in U.S. immigration court. Remain in Mexico applies to migrants who are not expelled under Title 42, and are allowed to make an asylum claim.

What do you want us to explains next? Let us know in the prompt box below.