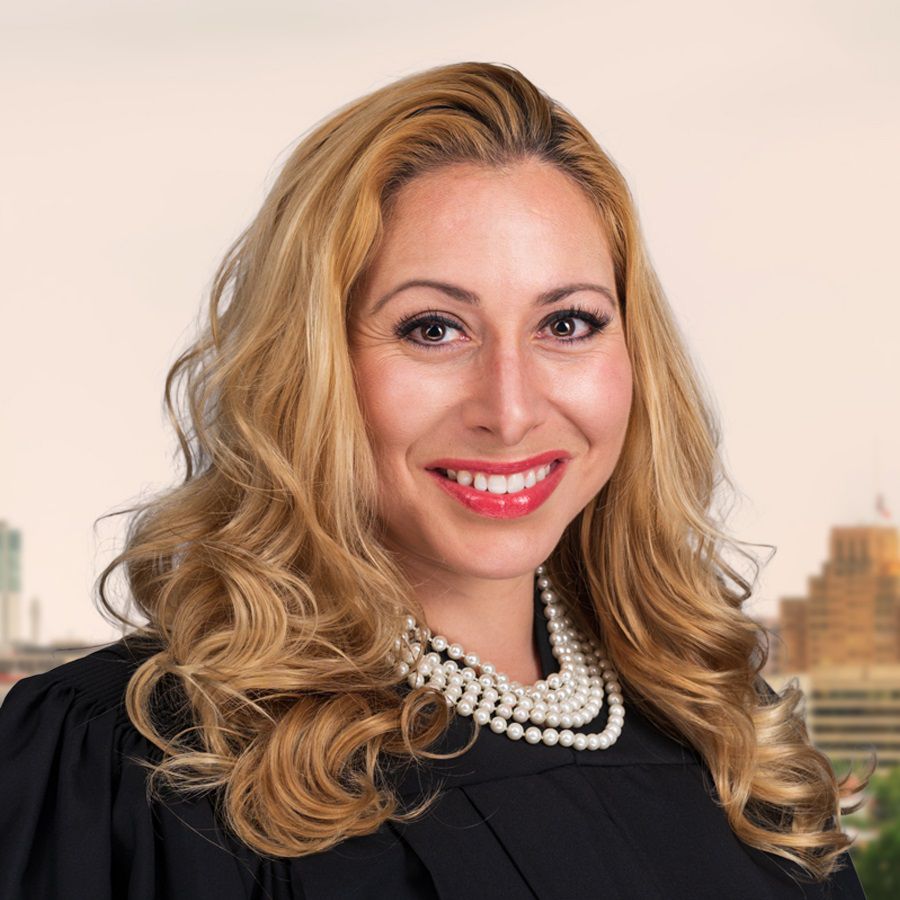 Expect the new year at the courthouse to begin with a full docket as there will be no limit to the number of jury trials that can take place at once.

There will also be a change in who the new local administrative judge will be. Judge Ron Rangel’s term has expired and 438th Civil District Court Judge Rosie Alvarado will be taking over for the next two years. (Read more about Judge Alvarado below.)

Rangel will still be the administrative judge for the district criminal courts.

2022 is also an election year and many judges will be running for re-election. Next year, in this newsletter we will introduce to you those judges and their opponents to better inform you of these important positions.

You can find the top 10 moments in Bexar County courts here.

Here’s a look at trials and court proceedings we can expect in the coming weeks. These dates are subject to change and could be reset.

Alfredo Martinez-Contreras: Charged with aggravated assault of a public servant and accused of killing an off-duty officer from the San Antonio Independent School District. His next hearing is scheduled for Jan. 4.Jimmy Turner: Accused of fatally stabbing a man in 2019. He is set to be sentenced on Jan. 6Jose Heriberto Hernandez: Charged with capital murder and accused of killing his mother and sister. His trial is set to begin on Jan. 14.

438th Civil District Judge Rosie Alvarado will be taking over local administrative judge duties for the next two years.

For 15 years she was an attorney focusing on civil litigation and even got to work alongside her father Leo Alvarado Jr. before his passing in 2009.

“That was rewarding, challenging and a growing experience,” Alvarado said. “It gave me a real appreciation for the man he was, the sacrifices he made for our family and his community and showed me how much he believed in making things right for his clients.

Since becoming the 438th Civil District Judge, she has worked closely with foster youth in the PEARLS, EAGLES, and Children’s Court Programs and was also appointed by the Texas Supreme Court to be a Commissioner on the Texas Children’s Commission.

“Truly affecting positive change for youth who have experienced past traumas and adverse childhood experiences is incredibly fulfilling work but also so needed and takes great investment.”

As the new local administrative judge, Alvarado’s hope is to effectively administer and oversee the management of the judiciary, develop and maintain a good working relationship between the judiciary and Commissioners Court on budgetary matters, continue to work with the local public health authority and update the public on safe court operations and timely address matters and carry out any other duties which may be presented.

“I’m looking forward to the work ahead of me,” Alvarado said.

When not busy in the courtroom Alvarado enjoys spending time with her children, the outdoors and cooking. She hopes to one day write a fiction novel about challenges, growth and empowerment which was inspired by her daughters.

“They are the storyline inspiration,” Alvarado said.

There are often terms used in a courtroom that sound more like legal jargon than natural language. Even after years of covering court proceedings, I sometimes have to look up words to refresh my memory or make sure I fully understand them. In each newsletter, I include a different word or phrase so we can build our knowledge and understanding of the courtroom together.

Mistrial: This occurs for a few reasons. One instance is when a jury is unable to reach a verdict and the other instance is when there is a procedural error or misconduct. The first instance is the most common. A retrial is generally granted after this happens.

This will be the last newsletter for the year. There is an article up on KSAT.com with the most memorable moments of the past year.

Thank you all for subscribing and following along. I’ve enjoyed covering courts and look forward to bringing you more trial coverage and live trial coverage next year. We will also dive into elections and make sure you know who is running for office and give you a closer look at each race. Sometimes these races get overlooked or are not followed as closely but we will make sure you are in the know.

Until next year, wishing all trial junkies a Merry Christmas and a Happy New Year!!

Thanks for reading — Erica Hernandez