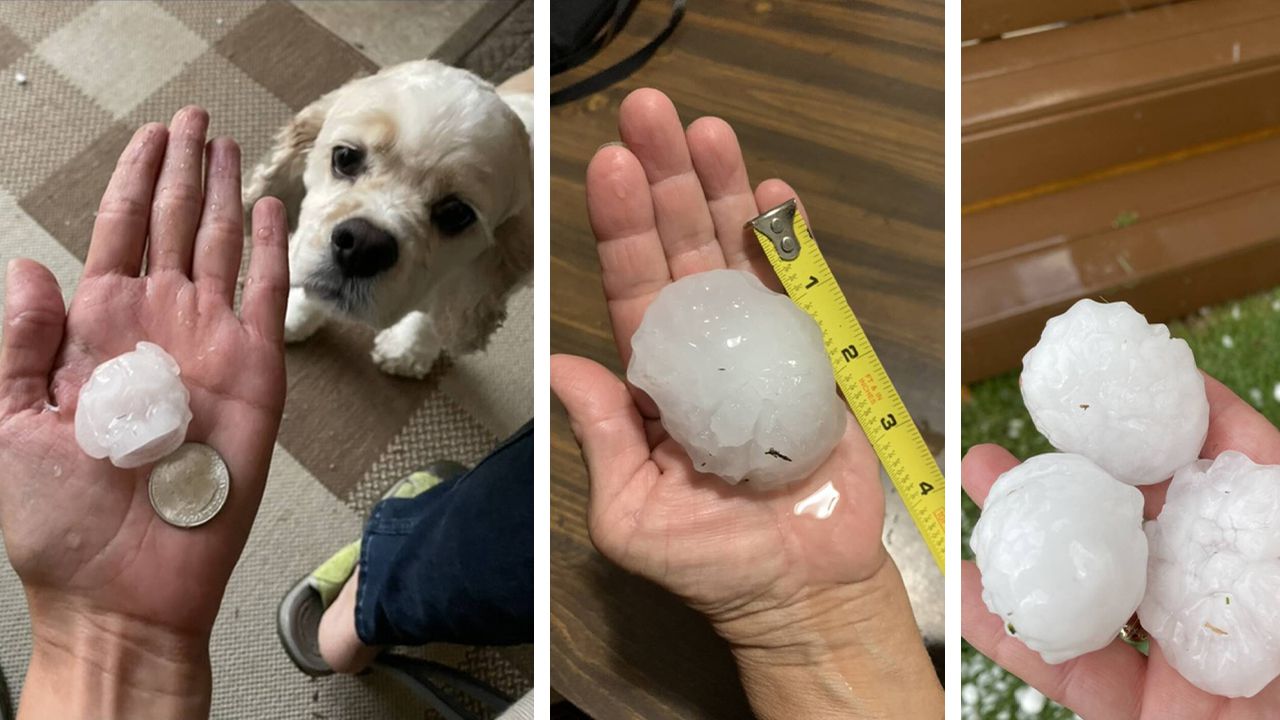 Few things in life are certain. But when it comes to San Antonio in the spring — there’s a good chance you’re going to see some hail.

If you’ve lived in South Central Texas for a while, you’re probably no stranger to hail. There was a significant hailstorm just last week. But there’s a lot about the science of these weather events that you may not know. (Watch the full episode in the video player above.)

Feel like hail is something you have to deal with every year? It’s not your imagination.

Over the past 10 years there have been at least 16 large hail events in and around the San Antonio area, according to the National Weather Service.

One of the reasons we have very large hail in South Central Texas is because of our proximity to the West Texas dry line.

Take, for example, the hailstorm that hit the San Antonio area in early May. Temperatures were so hot behind the dry line in Cotulla in the afternoon that they fired off a few showers. These showers then moved into warm, humid air closer to San Antonio and exploded into thunderstorms. One thunderstorm tracked right over San Antonio as it was strengthening and moved across the central parts of the county.

And many remember the very destructive hailstorm of April 12, 2016. A very large hailstorm moved across Bexar County just north of downtown that evening. Tennis ball-sized hail fell in a swath from the Government Canyon area to the San Antonio International Airport, and east through Saint Hedwig.

Some of the largest hailstones that were up to softball size fell near Helotes and Leon Valley, and east in Alamo Heights and Kirby.

This one event resulted in $1.36 billion in damage, making it the second costliest hailstorm in Texas history. Another storm with large hail would hit San Antonio just two weeks later.

How does hail form?

To have hail, your first have to have a thunderstorm. Thunderstorms, especially large and organized ones called supercells, have updrafts and downdrafts. These are areas of fast-moving wind going up into the storm and then down onto the ground.

The updraft transports raindrops to the very top of the storm where the raindrops freeze because it’s so cold. This is the very beginning of a hailstone.

It goes without saying that the bigger the hail, the worse the damage will be. But what makes some hailstones so big?

Once a hailstone forms, it goes on a bit of a wild ride. Those updrafts and downdrafts in a thunderstorm carry the hail up and down, up and down. Each trip adds another layer to the hailstone as it bumps into supercooled water droplets, making it a little bit bigger each time around.

Eventually, the hailstone becomes too heavy and falls out of the storm. A strong storm can support or carry larger hail. On the flip side, a weak thunderstorm will produce smaller hail — sometimes as small as green beans.

Watch the video below from the KSAT Weather Authority team to see how hail forms:

According to the National Weather Service, the largest hailstone ever recorded in the United States fell in South Dakota in 2010. It was eight inches in diameter and weighed nearly two pounds.

As you can see above, that hailstone almost looks like it’s made of a lot of smaller stones. It’s also got some appendages. So, what causes that?

Hailstones can have different shapes based on their journey through a storm. Some perfectly round hailstones will have rings — just as trees have rings. Each ring represents a trip back up to the top of the storm.

Sometimes hail can look jagged with appendages. These stones likely started to melt on their way down a storm, and then refroze as a storm’s draft carried it back up to the top.

Finally, some stones look a little bumpy. This is a result of smaller stones bumping into one another to form one larger hailstone.

Hail is very common in any thunderstorm, but large hail is rarer. Hailstones can range in size from a quarter of an inch to over four inches in diameter.

Pea- and penny-size hail can be noisy, but is unlikely to cause a lot of damage. However, once hailstones get to the size of quarters or larger, significant damage can occur. Hail the size of tennis balls and larger can cause catastrophic damage and injury.

Because of this, severe thunderstorm warnings are issued for storms with the potential to create quarter-size hail or larger.

So what should you do if you find yourself under a severe thunderstorm warning for hail?

If you’re in your home, stay inside until the hail stops. Don’t go outside even to cover your car — it’s too late for that if it’s already hailing.

It’s also important to stay away from all windows, including skylights. Large hail can break glass.

If you are in a car during a hailstorm, try to find a safe place to pull over — like under a gas station awning. However, it’s important to remember never to park under a highway overpass. This could lead to car accidents. Next, turn your back to the car windows and don’t leave the car until the hail stops.

Finally, if you sustain damage to your home or other property, be sure to document the time the hail occurred and the size of the hail. This is necessary for insurance purposes.

Click here for some tips about what to do if your property has been damaged by hail.

Past weather-related episodes of KSAT Explains: