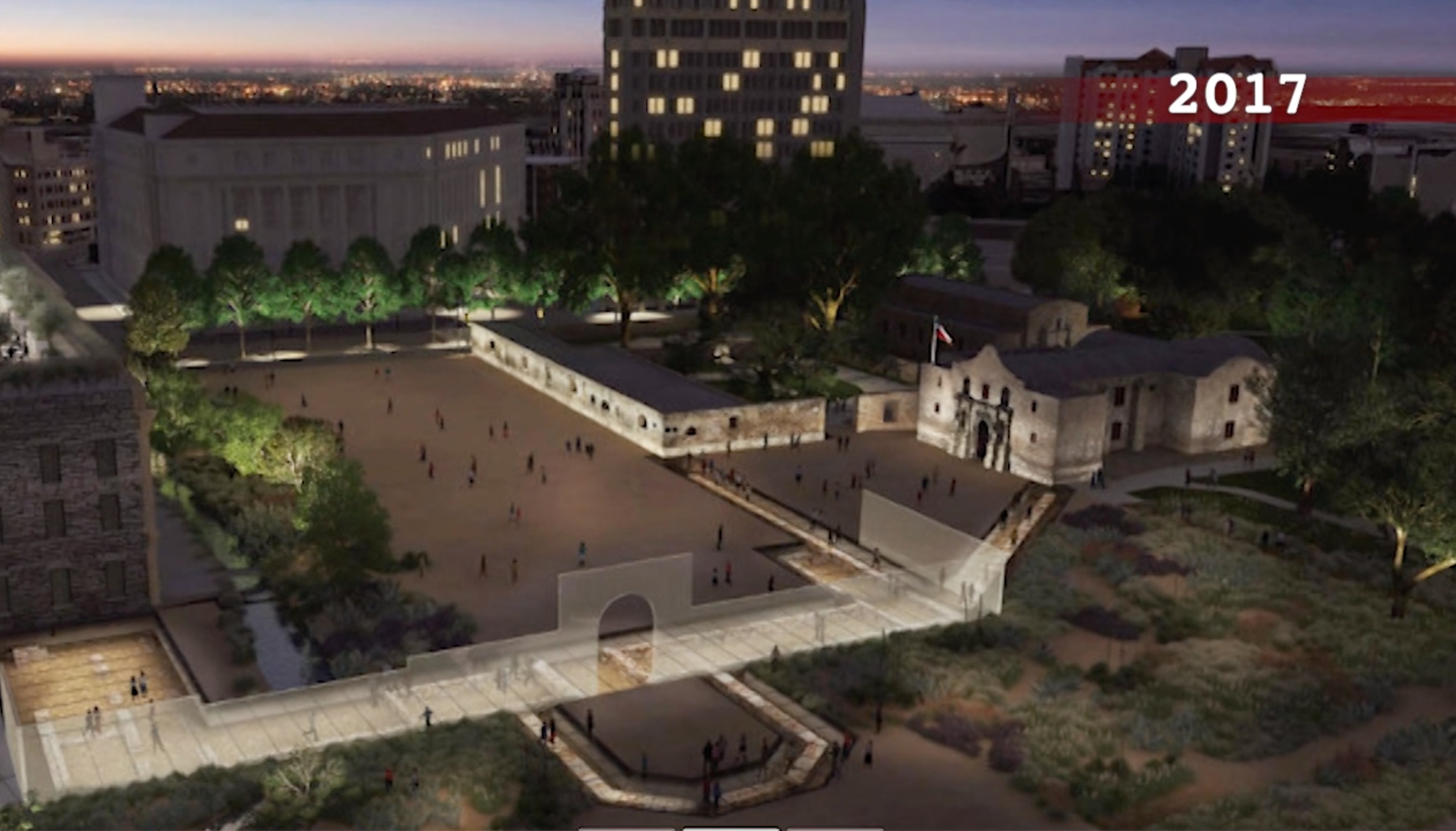 The Alamo is one of the most historic sites in the United States and it’s located in the heart of downtown San Antonio.

The Spanish mission was built more than 100 years before the start of the Texas Revolution, but it is best known for the battle that happened on its grounds in 1836.

The Battle of the Alamo has been depicted in film and television for nearly a century. It has turned men who lived long ago into larger-than-life Texas legends.

But recent headlines about the Alamo have focused on the controversial plans for its future.

In this episode of KSAT Explains, we examine the history, legacy and myths associated with the Alamo, as well as the battle over how the historic mission is remembered. (Watch the full episode in the video player above.)

The Alamo is steeped in history, but the push to revamp the way that history is told has been at the center of a contentious debate over how to redesign Alamo Plaza.

The Alamo Master Plan was unveiled in 2017. Part of the plan included closing off traffic in front of and around the Alamo, and creating a museum to help tell the full history.

“It’s something that I believe will heal a lot of deep wounds in terms of what how something like this that it doesn’t acknowledge its complete telling, it’s full history, what it’s done to to our community,” said Robert Trevino, District 1 city councilman and former member of Alamo Management Committee.

But the biggest battle in the redesign plan has been over moving the cenotaph. The large white monument dates back to 1936. It stands in front of the church and long barracks in honor of the defenders who fought and died there.

The cenotaph’s new location was initially approved by city officials, but the idea sparked protests from several sides.

State, local officials and other groups have gone back-and-forth on the future of the cenotaph and the redesign plan has largely remained at a standstill.

“What we’re faced with now is a project that is highly politicized. We’re trying to work around that, trying to get make sure that we don’t lose our guiding principles, we don’t lose the whole reason that we try to do this project and most importantly, that we tell our story,” said Trevino.

In the video below, we dive deeper into the plan, the issues surrounding race and proper representation raised amid the redesign and why the battle over the cenotaph does not appear to be ending any time soon.

Alamo’s history before and after Texas Revolution

To understand why the battle over the Alamo’s future is so contentious, it’s important to understand its past.

There are many layers and complexities when it comes to the Alamo’s history. Texas was a frontier region when the Spaniards began to explore the area.

It was difficult to establish a foothold in the area so the Spaniard established missions across the state.

Indigenous people, known as the Coahuiltecans, had been living in Texas for thousands of years and the Spanish wanted to convert them to Catholicism.

From 1680 to 1690, Spain established missions near the present-day towns of El Paso, Presidio and Nacogdoches.

The mission that would later be known as the Alamo was founded in May 1718 as Mission San Antonio de Valero.

Six years later, the mission was relocated to where it stands today. It operated until 1793 when the Spanish crown ordered that the land be given to converts, but things changed in 1803.

“That is the year of the Louisiana Purchase. So before that, Spain was controlling Louisiana. And so when they lose Louisiana, we have to give it back to France and Napoleon sells it. That leaves the borders open to the threat of this emerging country known as the United States,” said Ernesto Rodriguez, Alamo curator.

In response to emerging threats, Spain sent soldiers west to defend their territory that included the San Antonio area. A cavalry unit called the Alamo Company converted the old mission into a military outpost and it became known as El Alamo.

In the video below, we break down the next three decades and what led to the Texas Revolution and ultimately Texas winning its independence in April 1836, a month after the 13-day siege at the Alamo.

The Battle of the Alamo and the war was fought for many reasons that included the opposition of General Santa Anna’s dictatorship and the efforts by colonists to make Texas a slave state after it was abolished by Mexico. In fact, historians believe many slaves escaped to Mexico and some fought for the country against the Texians.

“It takes a while for us later to determine the meanings of each conflict,” said Lesli Hicks, professor in the History department at University of Texas at San Antonio. “But I think immediately people knew something big had happened at the Alamo and it was going to turn the tide of history. Texas ultimately is going to become part of the United States. And that really starts in the tragedy of the lives lost at the Alamo.”

The story about the Battle of the Alamo quickly became a magnet for larger than life myths and legends.

People are more familiar with the legendary stories associated with the Alamo instead of what actually happened.

Hollywood has helped fuel these myths, depicting the battle on multiple TV shows and movies dating to 1915.

While some of the things we have all come to know about the Alamo are true, many others are not.

“The truth is there was a battle at the Alamo and that people named William B. Travis and Jim Bowie and Davy Crockett died at that battle. Once you get beyond that, it becomes really fuzzy,” said Chris Tomlinson, columnist for the San Antonio Express-News and Houston Chronicle.

Tomlinson, who co-authored a book set to be released in June titled Forget the Alamo: The Rise and Fall of an American Myth said the Alamo was mostly an afterthought for decades after the battle.

“The Alamo was largely forgotten after the battle of 1836 and it only really came back into the public imagination after the Civil War when Texans were looking for a new myth, a new origin story that did not include the baggage of slavery,” said Tomlinson.

“There were no professional historians before 1880. When they started digging into the Alamo history, they only looked at what the white people said about what happened and they conveniently left out some Mexican army reports such as Travis offering to surrender the night before Santa Anna attacked, the fact that Davy Crockett was captured alive and executed on Santa Anna’s orders,” said Tomlinson.

Despite recent revelations unearthed by historians, the myths of the Alamo remain strong. Films and TV shows have fed into the lore and made the Alamo and San Antonio a popular tourist destination.

“I grew up in San Antonio and like many people, I thought about the Alamo,” said Mario Marcel Salas, local historian and former UTSA political science professor and city councilman. “I saw the old John Wayne movie as a child and like many other people was kind of captivated by the story they told because it was a story of heroic people who put up a good fight and tried to change the course of their destiny. But that’s a very shallow explanation of the whole thing.”

So what is fact and what is fiction when it comes to the Alamo?

In the video below, we take a closer look at the myths surrounding the Alamo, whether Travis drew a line in the sand with his sword, his victory or death letter and the longstanding belief that no one survived the battle.

Throughout the debate over the Alamo redesign plan, some have argued that one way to fight the myths is to tell the full story in a way that has not been done before.

That includes stories from the Indigenous people of San Antonio. In 2001, the City of San Antonio issued a proclamation recognizing the Tap Pilam Coahuiltecan Nation as the first tribal families of San Antonio.

The Alamo served as a Catholic mission long before the battle. Hundreds of Indigenous people are believed to have been buried at the site.

“That history is extremely important to us because we’re living in it now. That’s our children and our grandchildren’s legacy,” said Ray Hernandez, Tap Pilam tribal council member. “What has happened over time is that we have been excluded from the history books in the educational system.”

The Daughters of the Republic of Texas is an organization that served as Alamo custodians for more than 100 years.

Martha Fleitas, the historian general of the DRT, can trace her lineage to her ancestors who settled in Texas prior to when the state joined the U.S. at the end of the year 1845.

The DRT is dedicated to preserving the history of Texas, particularly before statehood and during the republic. They have a huge collection of artifacts prized by Texas historians.

“I think most tourists come to see where Davy Crockett died,” said Fleitas. “Do we stop it there? No. That’s why they come but we need to have a museum. We need to have docents. We need to have signage. People need to know that this was a mission and who was here.”

Another aspect critics say gets glossed over is the role Tejanos, Texans of Mexican descent, played in the battle. Historians say Juan Seguin and Lorenzo de Zavala were as important to Texas independence as people like Travis and Sam Houston.

“When the outbreak of the Texas revolution in 1835 started, many joined up. People don’t realize is that if you joined as a native Texan and the war didn’t go your way. You have no home because you can’t stay. You can’t go to Mexico because you just fought against them and going to the United States is a new place for you,” said Hernandez.

Many contributions were forgotten or left out altogether during the Jim Crow era in Texas when minorities and people of color had little to no rights and their voices were silenced.

“We saw the stories of Juan Seguin, who was betrayed by the white revolutionaries, downplayed,” said Tomlinson. “De Zavala was perhaps the most famous person in the Texas revolution because of his previous role as vice president of Mexico. We’ve seen the portrayal of him and his experience completely rewritten to serve this Anglo white supremacist myth.”

There were also important Tejanas who treated and cared for injured defenders. But a lot of these stories have been overshadowed by the myths.

Many people are now hoping that whatever happens to the Alamo’s redesign plan. It’s more inclusive and tells a larger story than in the past.

“It’s really important to show everybody’s role in that, whether you were born, native, born or just arrived. It’s important for people to know that this is a bigger story,” said Hernandez.

Hear more from the descendants and the effort to have their stories told in the video below.