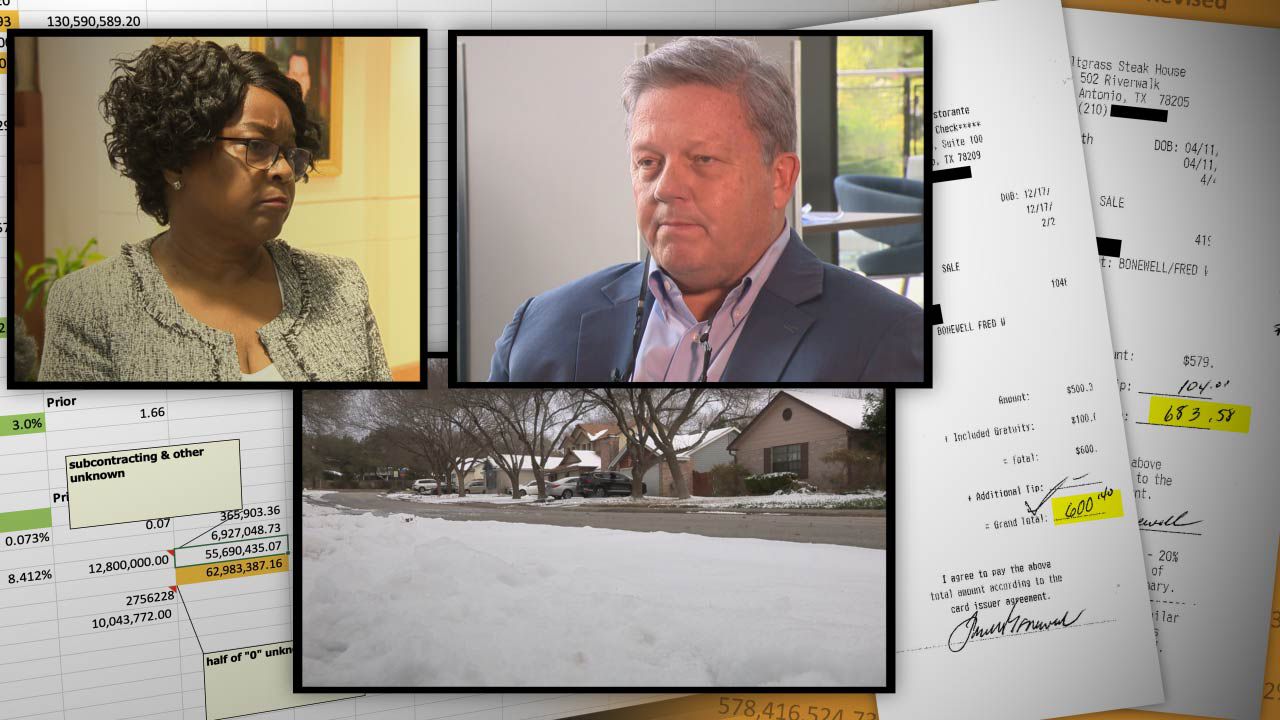 While February’s deadly winter storm not only left hundreds of thousands of San Antonio residents without power in subfreezing temperatures, some for days on end, it also exposed a large number of organizational issues within CPS Energy, the largest public power company in the nation.

In early March, weeks after the severe weather had passed, a KSAT 12 Defenders investigation revealed that the utility had relied on a college student to provide its forecasting during the winter blast and did not have a meteorologist on staff.

The contractor, who referred to himself on social media as “Kid Cold Front,” had not been compensated more than $716 in a single week.

This approach to forecasting from CPS Energy was not in line with the state’s other major utility companies and retail energy providers.

Officials with CPS Energy and a local university gave conflicting information on the contractor’s education status for months.

A CPS spokesman told the Defenders the contractor graduated from the University of the Incarnate Word last December with a degree in meteorology.

But after the Defenders attempted to verify the contractor’s college credentials, a UIW spokesperson said as of this spring he was still a student in the School of Mathematics, Science and Engineering, and was not listed as a graduate.

Energy experts this spring said CPS Energy’s poor risk management strategy contributed to the utility being forced to pay hundreds of millions of dollars for natural gas on the spot market, after the price per unit had skyrocketed, in order to continue heating homes and supplying power to its plants.

Records obtained by the Defenders show CPS received natural gas deliveries that jumped in quantity starting Feb. 11 — days before the storm hit but days after some experts had already started predicting the blast could impact the infrastructure of utility companies.

By then, the price of natural gas on the spot market had already nearly doubled, according to the U.S. Energy Information Administration.

In a Feb. 10 news release, the same day CPS received only 180,000 MMBtu (units of natural gas in Million British Thermal Units) of purchased natural gas, officials of the utility conceded the incoming arctic airmass could affect its equipment as well as the Electric Reliability Council of Texas (ERCOT) grid.

On that critical day of storm preparation, records show the amount of natural gas delivered to CPS actually decreased from the day before, when the utility received 190,000 units of purchased natural gas.

“Absolutely. They were caught flat-footed. I’m sure they didn’t expect the market to go this way, but it did. Were there protections that could have ameliorated this exposure? Probably so,” said Ed Hirs, University of Houston Energy Fellow, when asked in March about CPS’ exposure to high natural gas prices.

CPS Energy officials contend that natural gas suppliers overcharged and even price gouged during the storm, leading to the utility’s decision to challenge the amount owed for fuel in close to 20 lawsuits, some of which have already been dismissed by CPS Energy.

As of last week the utility was still fighting close to $590 million in costs accrued during the freeze.

CPS Energy has also been named in at least a half dozen wrongful death lawsuits stemming from the storm.

The massive financial obstacles for CPS Energy continue as the utility is asking for a projected 3.85% rate increase.

The increase, if approved by San Antonio City Council, would take effect March 1, 2022.

February’s deadly storm and the utility’s decision to challenge its fuel costs in court led to conflict within the upper echelon of CPS Energy management.

A Defenders investigation in June revealed the attorneys, who had a combined 88 years of legal experience, lodged internal complaints against then-President and CEO Paula Gold-Williams.

Utility officials, who refused to release the contents of the complaints against Gold-Williams, said in a written statement the claims and subsequent counter-claims were related to February’s winter storm and the financial issues facing the utility.

The Texas Attorney General’s Office in September allowed CPS Energy to keep the complaints confidential but ordered the utility to release one standalone complaint attached to the information at issue. The one-page complaint accused Gold-Williams of ruling the utility “via her senior leadership team with fear and intimidation.”

“Many employees walk on eggshells around her to avoid her wrath,” the complaint alleged.

The complaint stated that at one point Gold-Williams told members of her senior leadership team that they needed to protect her and align with her, and that her lectures had left senior staff members “dejected, despondent and downtrodden.”

Within weeks of the complaint being made public, Gold-Williams informed the utility’s board of trustees that she would be stepping down, effective in January 2022.

Gold-Williams has moved into an advisory role for her remaining time with the utility.

Bonewell departed the embattled public utility just months after being promoted to its number two position.

A Defenders investigation in October revealed that Bonewell made an ethnically insensitive comment in front of four fellow employees in October 2018, which led to a formal complaint being filed against him.

Bonewell was the subject of at least eight personnel complaints since January 2018. Five of them were later substantiated or caused Bonewell to receive ethics coaching or to take part in “direct conversations” with Gold-Williams, a utility spokeswoman confirmed.

Of those five, four complaints from February 2019 to May 2020 were related to Bonewell’s spending at work.

A months-long Defenders investigation earlier this month uncovered exorbitant purchases costing the publicly owned utility thousands of dollars during the tenures of Bonewell and Gold-Williams.

Expense sheets and receipts covering Bonewell’s tenure show that he often charged multiple meals a day or high-price meals to his company purchasing card, including:

On a single day in November 2018, Bonewell charged breakfast at the Guenther House, lunch at the now-shuttered El Mirador and dinner at J. Alexander’s.Bonewell ate (and expensed) at a North Side brunch spot called Snooze on more than 100 occasions, often multiple times per week.A $683 meal at Saltgrass Steak House on the River Walk in April 2018 included the purchase of more than a dozen steaks. The meal was described as a safety kickoff thank-you luncheon and was attended by various other CPS managers and directors, records show.A $378 expense at Brazilian steakhouse Fogo de Chao.Numerous high-price meals at various Paesano’s locations, costing taxpayers $704, $688 and $600.

By contrast, CPS Energy rank and file staffers who took part in employee engagement meetings in July 2019 were fed hot dogs and chili purchased from Sam’s Club, according to purchasing records of an employee associated with Bonewell’s work duties.

A travel receipt from December 2016 shows Gold-Williams used her purchasing card to be driven by a chauffeur from a Washington, D.C. hotel to Reagan National Airport. The trip, which covered less than seven miles, cost $225.

Gold-Williams, in all, used her purchasing card for more than $14,000 in luxury chauffeur fares, as she traveled extensively on behalf of the utility pre-pandemic.

The charges often totaled several hundred dollars per trip, depending on which city she was in and whether she made multiple stops before arriving at her destination, records show.

Gold-Williams used her purchasing card to make more than $9,700 in donations to outside organizations and the education fund for the children of a CPS Energy employee whose wife suddenly passed away.

The expenditures were covered by the utility, records show.

Additionally, Gold-Williams used the corporate card to charge close to $9,600 worth of flowers and gift baskets, before appearing to abandon the practice in August 2018.

Many of those purchases included gift messages suggesting they were made on behalf of Gold-Williams and the CPS Energy family, while some included no description at all, leaving it unclear whether those expenditures were personal or professional.

Utility officials earlier this year were unable to rule out whether the miscalculations were done intentionally.

The mistakes, which took place during the submission of data to the Fair Contracting Coalition for its 2017 report card, exaggerated how much the utility spent to procure goods and services from minority-owned businesses and caused it to erroneously get a ‘D’ instead of an ‘F’ that year.

Lewis said utility officials became aware of the record-keeping errors earlier this year after the Defenders began asking questions about how it compiled its data.

The Fair Contracting Coalition (FCC) is a San Antonio volunteer group mostly made up of small business owners who push for large public entities in the San Antonio area to spend money locally and with companies that are small or owned by women, veterans or minorities.