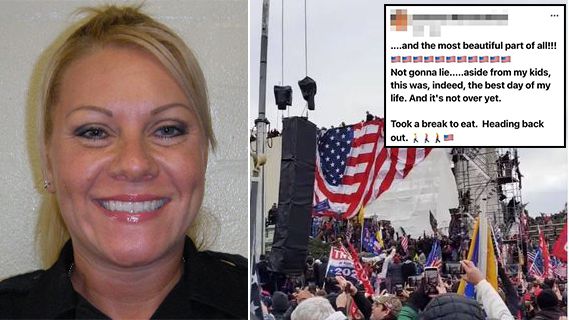 UPDATE 6/24/21 (VIDEO BELOW STORY): The attorney of the former Bexar County Sheriff’s Office lieutenant who was fired months after posting multiple photographs to Facebook showing her near the U.S. Capitol during the deadly Jan. 6 riot says he’s planning to file a wrongful termination lawsuit.

A Bexar County Sheriff’s Office lieutenant who posted multiple photographs on Facebook showing her near the U.S. Capitol on Jan. 6 as a protest erupted into a deadly riot has been fired, BCSO officials confirmed Wednesday night.

Lt. Roxanne Mathai, 46, was given an order of dismissal five months after BCSO Sheriff Javier Salazar said he intended to never have her set foot in a BCSO building again.

Mathai’s attendance at the insurrection first became public in a report by the KSAT 12 Defenders on Jan. 7. She later claimed through an attorney she was unaware of the bloodshed, including a slain police officer, at the riot.

Pictured in a red, white and blue mask and draped in a President Donald Trump flag, Mathai posted photos throughout the day Jan. 6 as the world watched Washington, D.C., burst into chaos.

In the photos, Mathai was shown walking and states she was headed to the Capitol after listening to Trump deliver a speech during the “Save America March.”

Mathai also posted a picture showing rioters after they had broken through a police line and occupied the balcony of the Capitol.

“……And we are going in……in the crowd at the stairs…not inside the capitol like the others. Not catching a case lol,” wrote Mathai next to a selfie and several photos of rioters scaling scaffolding in front of the Capitol.

“Not gonna lie…..aside from my kids, this was, indeed, the best day of my life. And it’s not over yet,” wrote Mathai alongside another series of photos.

She included the American flag emoji in the captions of images of hundreds of President Donald Trump supporters breaching the federal legislative building, a sight not seen since the War of 1812.

Days after the fatal uprising and through an attorney, Mathai told the Defenders she was hundreds of feet behind rioters and was unaware of the bloodshed taking place in front of her.

More than 480 people have now been criminally charged for their roles in the riot. Five people died during the melee, and more than 140 people were injured.

Mathai was not criminally charged.

Mathai’s attorney earlier this year said Mathai approached the steps of the Capitol, but added that a 35-second video clip posted to Facebook in which she says, “We’re going in. Tear gas and all. Tear gas don’t bother me,” was social media bluster.

Clouds of chemical irritants, which are typically used by police to disperse crowds, could be seen during the footage.

Mathai went through the BCSO grievance process after being handed the dismissal, but the termination was upheld, according to a BCSO spokeswoman.

Mathai will have to go through civil service to further grieve her dismissal, the spokeswoman added.

Separately, a proposed dismissal handed to Mathai earlier this year following an unrelated investigation into a possible inappropriate relationship between her and an inmate was shortened to 120 days, officials acknowledged Wednesday.

Mathai was able to get the punishment reduced after going through the grievance process.

Attorneys representing Mathai have for months taken issue with Salazar’s description of that incident, claiming it simply involved Mathai receiving messages from someone she believed was in jail and using a contraband cellphone and was in no way sexual in nature.

An attorney for Mathai said he would release a statement regarding her termination Thursday. See the video below.