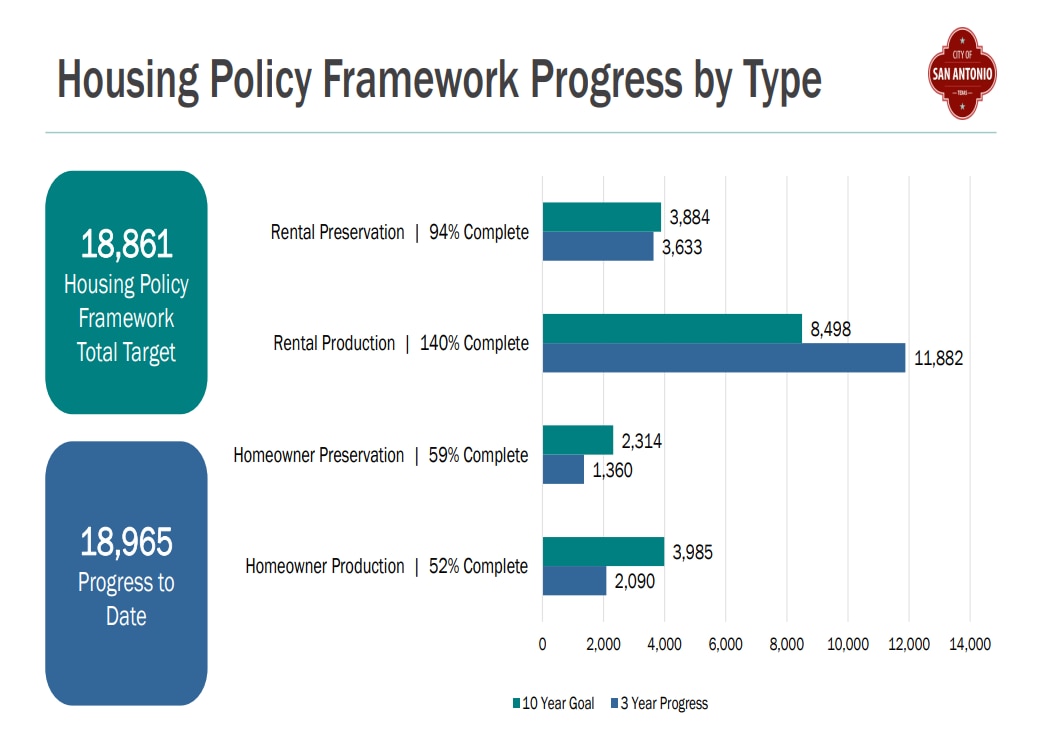 In the face of a housing affordability crisis, the San Antonio City Council adopted a new 10-year plan on Thursday that aims to produce or protect 28,049 affordable housing units.

The Strategic Housing Implementation Plan, or SHIP, was approved unanimously with one abstention and a second councilwoman away from the dais. At its core, the SHIP is about helping 95,000 Bexar County households who are most at risk of housing instability.

The city’s growth is surpassing housing supply, and housing costs are outpacing incomes, staff say. The SHIP’s approach to resolving the issue is two-fold — build and preserve affordable housing units and help struggling households increase or subsidize their income through job training and public assistance.

The SHIP was designed over the course of a year and a half and developed with the help of 80 stakeholders. The San Antonio Housing Authority, San Antonio Housing Trust, and Bexar County are all partners in the plan, which they are also expected to adopt.

“This is not the City of San Antonio’s plan. This is our community’s plan,” Assistant City Manager Lori Houston told council members.

Houston said the mayor’s housing policy framework, which the council adopted in 2018, was the basis of the SHIP. However, it also takes into account several other plans, like SA Climate Ready and the city’s Homeless Strategic Plan.

With many of the original targets in the framework completed or underway three years into a 10-year time frame, the SHIP contains updated goals.

The framework, for example, had aimed to preserve or produce 18,861 housing units within 10 years. By July 2021, there were already 18,965 units, although that was primarily due to a boom in new rental units.

New targets for preserving and protecting affordable units for residents below specific income levels are the SHIP’s centerpiece.

Nearly half of the housing production and preservation targets are for the city’s poorest households, including 1,000 units of permanent supportive housing, which is often used to help people transition out of homelessness.

To meet its goals, the plan calls for 36 different strategies, from establishing a land bank program to not using public dollars to support market rate development that would displace residents.

Each strategy related to the city would come back before council for approval. The council approved the first, an adjustment of the city’s fee waiver program, immediately following its approval of the SHIP.

The plan calls for $3.4 billion worth of funding for the housing goals. Staff say about $1.1 billion of locally directed resources. One of the big funding blocks is the $150 million included in the proposed 2022-2027 bond program.

District 10 Councilman Clayton Perry was wariest of adopting the plan, saying he supported affordable housing but wanted to ensure the city maximized the use of other pots of money, not city dollars.

“So I’ll support that with that proviso that each one of those things come back to the council for discussion and for an individual vote,” Perry said.

While several people during the public comment portion praised the SHIP, some asked council members to delay their vote so residents could get more time to look at the final version of the plan, which was posted Monday.

District 5 Councilwoman Teri Castillo supported that request, though the council voted down her motion to delay by a 4-7 margin.

Castillo abstained from the final vote of approval on the SHIP, though she later released a statement signifying her overall support of the plan.

District 7 Councilwoman Ana Sandoval was away from the dais at the time of the council’s vote.

Evictions on the rise months after federal moratorium ends