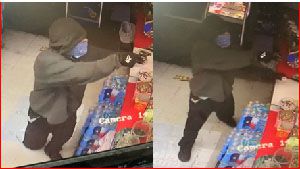 San Antonio police and Crime Stoppers are searching for a man who allegedly robbed a West Side food mart at gunpoint last month.

Police said the man approached an employee behind the counter with a gun and demanded money.

The man then took the money from the cash register and fled on foot.

Crime Stoppers is willing to pay up to $5,000 for information leading to a felony arrest in the crime.