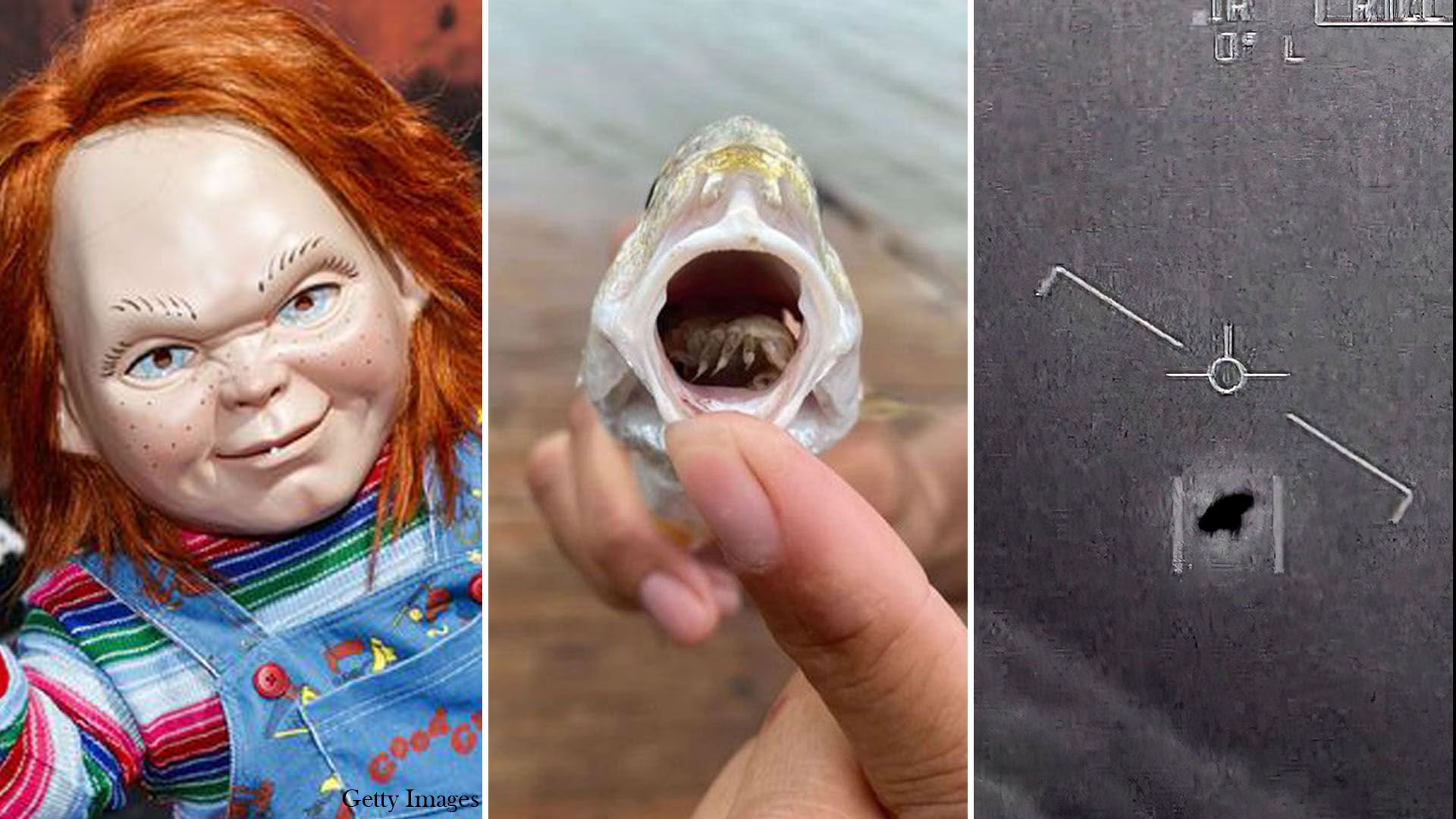 This year was strange.

If the COVID-19 pandemic wasn’t enough, 2021′s weird news taught us to always be on our toes and expect the unexpected.

It’s unknown what lies ahead in 2022, but for now, let’s take a look back at some of the weirdest happenings of 2021:

The Texas Department of Public Safety made Texans stop and stare at their phones in January after accidentally sending out an AMBER Alert for a disturbing pair of dolls — Glen Ray and Chucky from the “Child’s Play” horror films.

Eventually, DPS officials clarified the reason for sending out the alert, saying the IT department sent it out by mistake during a test.

The good news is that the creepy dolls were never actually loose in Texas.

The long-awaited UFO report released to the public by The Pentagon wasn’t exactly all it was hyped up to be.

Investigators said they didn’t find any evidence of extraterrestrials after reviewing 144 sightings of aircrafts or other flying devices; however, they did draw a few other conclusions.

According to a report from The Associated Press, researchers said they need “better data collection,” and that there was “too little information” for them to even “broadly characterize the nature of the incident.”

In short, more work needs to be done before U.S. officials can determine if any of the aerial threats reveiwed could pose any risk to national security.

Yes, this tongue-eating parasite is real, and what’s worse is it was found at a Texas state park.

A tongue-eating louse was found inside the mouth of an Atlantic Croaker at Galveston Island State Park in October, according to the Texas Parks and Wildlife Department. And, believe it or not, they’re actually pretty common among certain species of fish.

The creature actually detaches the fish’s tongue before attaching itself to the fish’s mouth, essentially replacing the tongue.

Home that inspired ‘The Conjuring’ up for sale

If you’re a horror-film fanatic, then listen up — one of the most haunted houses in the nation is still up for grabs.

The presumably haunted Rhode Island farmhouse that inspired “The Conjuring” film has hit the retail market. If the spooky history of the home doesn’t scare you though, maybe the price will, as it is listed at $1.2 million.

The farmhouse, listed under realtor Mott & Chace Sotheby’s International Realty, resides in Burrillville and has 14 rooms on 8.5 acres of land.

Granted, “The Conjuring” wasn’t actually filmed at the farmhouse, but its history will surely give you chills.

Deadly parasite that burrows in bare feet infects 16 near Austin

As if the COVID-19 pandemic wasn’t enough cause for concern, another deadly infection was discovered in a small, unincorporated Texas city this year.

Although this time, the infection was from a parasite that burrows in bare feet.

According to a report from The Guardian, 16 people got the parasite, Strongyloides, from “unsanitary surroundings” in the town of Rancho Vista, which consists of about 400 homes.

The parasite can survive for decades without being detected. It burrows through bare feet, enters a human’s bloodstream, the lungs, and then heads for the windpipe, where it is then coughed up and swallowed, according to The Guardian.

The parasite can turn deadly at “certain moments,” such as if the person who is infected is taking steroids.

Those who came up positive for the parasite weren’t aware until they provided blood and stool samples for an academic study. Researchers said they may have found a common connection to the infections — terrible sanitary system failures.

The Guardian reports that those who were positive informed their doctors of their infections and were treated with a single dose of the anti-parasitic drug ivermectin.

As for the sanitary system failures, and to prevent future infections, the recommended solution was for the city to be connected to a municipal sewer system or to repair the existing septic tanks. You can read more on the story here.

Who lives on some coral under the sea — Spongebob not-so-square pants and his good friend Patrick Star.

A scuba diver with the National Oceanic and Atmospheric Administration actually found the porous pair, a yellow sponge and a pink starfish, off of the New England coast.

Be as it may, there was no pineapple in sight and the sponge wasn’t quite square.

But still, what are the odds? Maybe Nickelodeon was actually on to something.

One of the most haunted hotels in the U.S. is in San Antonio

Aside from the River Walk or the Alamo, downtown San Antonio also has a haunted history you may not know about.

A recent report from the Historic Hotels of America dubbed the Emily Morgan Hotel, located on Houston Street in downtown SA, as one of the most haunted hotels in the U.S. to date. And yes, if you dare, you can book an overnight stay.

The hotel was initially used as a Medical Arts building from 1924-1976, which housed doctors’ offices and served as a hospital, according to the hotel’s website. Then, the building was converted into modern office space. But almost a decade later, it became the Emily Morgan Hotel.

The most haunted floors of the hotel are the seventh, ninth and fourteenth floors, all of which have a spooky history, according to the report. Those floors reportedly served as a psychiatric ward, surgery level, a waiting area and a morgue, according to the HHA.

If that doesn’t give you chills, then maybe this will: Some guests who have stayed on the fourteenth floor claim they got whiffs of a scent that smelled like a hospital, and when they open guest-room doors from the hallway, they claim they found a scene from a hospital inside.

If you want to check out the hotel for yourself, you can find more on its website here.

It was an extremely lucky day for a plumber in Houston after he found hundreds of envelopes of cash and checks in the walls of Joel Osteen’s Lakewood Church while he was making some repairs.

This comes years after $600,000 was stolen from the church in 2014, according to KPRC, KSAT’s sister station in Houston. It was a crime that was never solved.

The plumber, who wishes to remain anonymous, was initially called to remove tile to fix a loose toilet on Nov. 10. When he began to move the toilet and insulation, it was then that about 500 envelopes fell out of the wall containing money.

He then contacted the church’s maintenance supervisor and turned in his findings.

However, the plumber did get a fairly hefty reward — $20,000 — from Crime Stoppers for his discovery.